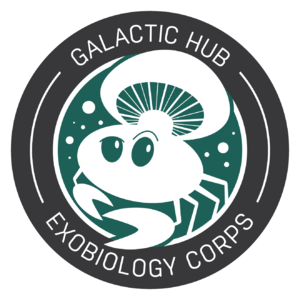 The Galactic Hub Exobiology Corps is a research organization.

The Galactic Hub Exobiology Corps is an official research subdivision of the Galactic Hub Project dedicated to exploration, discovery, and documentation of Fauna.

The mission of the Galactic Hub Exobiology Corps (GHEC) is to:

GHEC Researchers will know and properly employ Galactic Hub Naming Guidelines during the course of their exploration.

GHEC Researchers should use the format "Custom Name (Procedural Name)" when custom-naming fauna, or upload the species without renaming it. Names must not include any hostile or inappropriate references; such names may be removed from GHEC records.

After filling out the GHEC Volunteer Form, the Galactic Hub Council (particularly GH Founder 7101334 & GHEC Chief Research Officer old_school_rpg) will examine your volunteer application and, if possible, evaluate your wiki skills and any other relevant information.

The goal of the application process is to analyze your proficiency in wiki documentation and location of fauna species in-game. Your skills will not weigh heavily on whether or not you are accepted, but will determine what projects you are assigned to.

The four rarest and most prized creatures tracked by the GHEC in Galactic Hub space are the Greater Mushroom Beetle, the Stained Glass Butterfly, the Mega Rangifae or Mega Diplo, and the Mega Lesser Mushroom Beetle.

The entries below are a record of all of these rarest species discovered and properly documented thus far in the Galactic Hub. It will continue to be updated as new creatures are discovered and their creature pages created. (See the Fauna Hall of Fame for an overall list of the largest and smallest fauna discovered in No Man's Sky.)

Only the LE, CRO, or LFS-7’s may issue promotions. All ranks have certain criteria that must be filled in order to be eligible for promotion. Other factors to be included in promotions include time in service and time in rank.

The GHEC is organized into a hierarchical rank structure as follows: