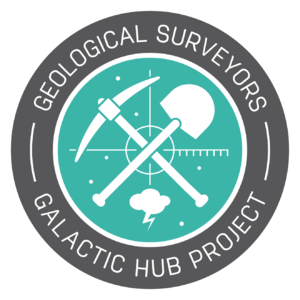 The Galactic Hub Geological Surveyors is a research organization.

The Galactic Hub Geological Surveyors is an official research subdivision of the Galactic Hub Project dedicated to exploring, discovering and recording geo-hotspots and any other notable geological landforms or Terrain Archetypes. Scouting for potential colonies and helping with the development of new colonies are also duties performed by the GHGS.

The mission of the Galactic Hub Geological Surveyors (GHGS) is to:

After filling out the GHGS Volunteer Form, the Galactic Hub Council (particularly GH Founder 7101334 and GHGS Chief Geological Officer LtGing) will examine your volunteer application and, if possible, evaluate any other relevant information.

The goal of the application process is to analyze your proficiency in locating and documentation of geo-hotspots and geological features, along with your ability to recognize potential colony locations. Your skills will not weigh heavily on whether or not you are accepted, but will determine what projects you are assigned to.

After an application is processed, applicants will be contacted via reddit or discord.

Colonies that were scouted, developed and managed by the GHGS.

See the GHGS Geo-Hotspot Catalog for a catalog of geo-hotspots found in Hub space.

GHGS members will know and properly employ Galactic Hub Naming Guidelines during the course of their exploration. Not all systems are required to be uploaded but it is strongly advised that any system in which a discovery is made be properly named and cataloged.

Only the LG, CGO, or LGS may issue promotions. All ranks have certain criteria that must be filled in order to be eligible for promotion. Other factors to be included in promotions include time in service and time in rank.

The GHGS is organized into a hierarchical rank structure as follows: