From No Man's Sky Wiki
Jump to: navigation, search
The subject of this article is from the Pathfinder update.
The information from this article is up-to-date as of 10 August, 2017.
This page fills the role of Embassy for the Galactic Hub Project Civilized space community.
The information found here represents a user-created civilization hub that is a creative addition to the game.

The Galactic Hub Project is a Civilized space community, the largest in the No Man's Sky universe. 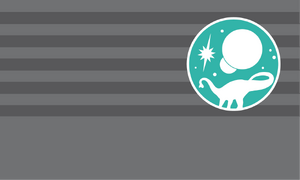 The Galactic Hub Project is a Civilized Space community focused on exploring a specific area of the Euclid galaxy with other players. This includes the Rentocniijik Expanse and 10 specific surrounding regions as follows: [1]

The capital system of the Galactic Hub is HUB-G-211 Lennon, location of Drogradur NO425, a lush planet with a ~6m diplo species. The capital system, in the Rentocniijik Expanse region, can be found at these coordinates:

The Galactic Hub Project is a member of the United Federation of Travelers. 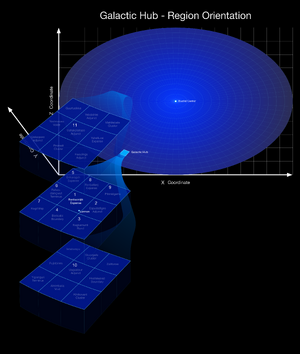 While not possible to see other players directly, you can still see and visit their bases, as well as interact with their Communications Stations. The Hub's close proximity and high density of players have a number of other advantages as well.

Those in the Galactic Hub can choose to follow its optional naming guidelines. These allow other travelers to quickly identify desirable aspects of a system or planet, such as noteworthy fauna, resources, or ships.

The Galactic Hub's sister civilization, Galactic Hub Hilbert, can be found in the Hilbert Dimension. Visit that page for more info.

The Galactic Hub Science Corps is an association of players in Galactic Hub space who are interested in researching so-called "Hub Science" - measuring specific, often subtle aspects of the game. Early examples of "Hub Science" would be the Subprojects, studying topics like weather, time, stellar region shape, and repeatable changes in the visual appearance of certain elements of solar systems.

Science Officers receive a unique badge (Ψ) on the Galactic Hub Subreddit and, also through Reddit, will be notified of any new Hub Science projects or discussions. Science Officers are never required to participate in any study or discussion and are always free to spend their time however they choose, but you should only sign up for the Science Corps if you're interested in actually engaging in discussions and studies when possible.

You can apply for the Galactic Hub Science Corps in this thread or message 7101334, Galactic Hub founder, on Reddit.

For a list of known systems, visit the Galactic Hub Project category index or use the link at at the bottom of this page. Any beginning with the "HUB-R-###" format tag are systems, where R is the letter representing the race.

"Core upgrades" refers to upgrades which are not "Coolant," "Damage", etc. Essentially, if it doesn't end with the words Sigma, Tau, Theta, or Omega, it's most likely a core upgrade (with some exceptions, such as Photonix Core, a Pulse Engine upgrade).

The 'Best of the Hub' - Main Attractions[edit | edit source]

(Sizes in the table always reference the larger of the two genders.)

Note that all "ship pieces" are only aesthetic and have no effect on how a ship functions. The exceptions are Cockpit Windows, which change how far you can look left or right while in your ship, or certain pieces which indicate a ship may have more or less slots.

Only a ship's class (Hauler, Fighter, Explorer, Shuttle) or grade (C, B, A, S) will affect its stats such as Damage, Shield Strength, Warp Range, and "Critical Health."

A Freighter with the same style and number of slots will always appear in any given system during the "Pirate Space Battle" events. Additionally, other freighters can be found in certain systems, such as the relatively rare "ball-nosed" freighters. 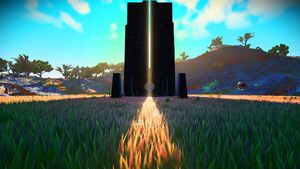 (Only for Portals marked with Communication Stations - also include PC/PS4, unless you know it's marked on both systems.) 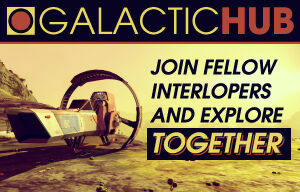 The official term for players exploring the Galactic Hub is interloper. The following sections relate specifically to interloper activities.

For a list of bases, visit the Player base (Pathfinder) page

For a list of farms, visit the Community Farms page

For a list of racetracks in the Hub, visit the Galactic Hub Cup page.

For a list players who have reached the Galactic Hub, visit the Census - Galactic Hub page.

Subprojects are specific research projects within the Galactic Hub. These usually focus on furthering understanding of No Man's Sky in some quantifiable fashion (such as understanding the exact time of dawn and dusk).

The purpose of Subproject Chronos is to understand the effects of time in No Man's Sky. A greater understanding of time in NMS may help with knowledge regarding weather/temperature patterns, the activity of fauna (as some are nocturnal or diurnal), and possibly other applications.

The purpose of Subproject Nimbus is to understand the effects of time in No Man's Sky. A greater understanding of weather in NMS may help with the creation of a No Man's Sky weather app.

The purpose of Subproject Atlas is to gain a better understanding of stellar clusters, better known as Regions, in No Man's Sky. Additionally, this subproject seeks to find a location in-game where the Rentocniijik Expanse is clearly visible in the night sky of a planet.

The purpose of Subproject Eden is to gain any meaningful understanding of the mechanism or purpose behind certain visual (and possibly characteristic) changes which can occur within a system, and seemingly be triggered by players. 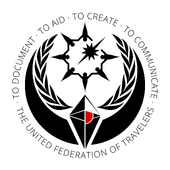 The Galactic Hub is a founding member of the United Federation of Travelers. We assist and cooperate with all civilizations, but will always prioritize fellow Federation civilizations. Historically, we have worked most closely with the Amino Hub, and also have a close alliance with No Man's Sky Love.

Embassy Systems are single systems claimed by the Galactic Hub in another civilization's space. Embassy systems have a few purposes:

Any images which don't require their own article (ie, fauna) and are not maps or navigational aids may be posted here.