This lush planet features a number of noteworthy characteristics, such as large gatherings of Oxyacta (wraiths), elaborate aquatic tunnels, tree-sized green flowers, and Rigogen plants (although sparse). Besides that, it is just a naturally beautiful, lush world.

This planet is the primary planet in the Galactic Hub Project's embassy in Deep Thought Collective space. Visitors to the system should be sure to leave Communications Stations here.

This planet's clear atmosphere presents no drain on exosuit systems under normal conditions. Days have a yellow haze, presumably from the water vapor in the air. During the day, the haze gives way to purple-tinted skies, occasionally broken by sparse black-silhouetted clouds. 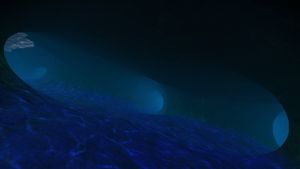 Poseidon's Pass is a system of interconnected aquatic tunnels, marked by a Communications Station on PS4. 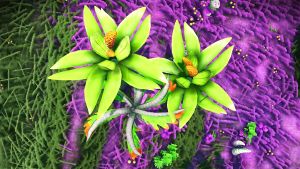 Teusia Ruendaris, the Galactic Hub Bloom, native to this planet.