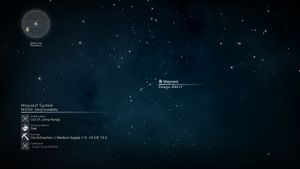 Galactic Map is a feature.

Galactic Map is a feature in No Man's Sky universe where the player can explore and discover star systems across the vast universe. It is available when the player is in space in their starship and can be accessed by pressing

(PS4/PC/Xbox) or using the Freighter Warp Map on the freighter's bridge.

Visited systems are interconnected with faint grey lines and are marked with a white dot with a circle around it.

At the top of the Galactic Map screen there are two options available, Destination and Filter.

It shows the distance in light-years for the current destination.

It shows different colour coding for the star systems, but there is no in-game legend for explaining these.