Galbring is a moon in No Man's Sky.

Galbring is a moon in the Jabberwocky Quintus star system on the PS4 version of No Man's Sky universe. It is currently the topic of intense study and debate by the Quintus astronomers. There is little disagreement that Galbring is a moon, based on it's size. However, despite it's proximity to Reheadle, there is not a consensus whether it is actually a moon of Reheadle. Some astronomers believe it may have been captured into orbit some time in the past and is not native to Jabberwocky Quintus, since it is so unlike the other planets in the system in its make-up. 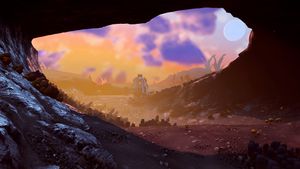 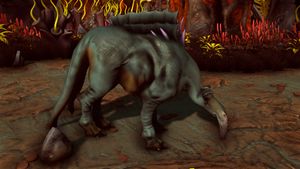 C. Darkbuditeum is a herbivore that eats the flowers from the solar vine