From No Man's Sky Wiki
Jump to: navigation, search
The subject of this article is from the ExoMech update.
The information from this article is is up-to-date as of 10 June, 2020.
This page fills the role of Headquarters for a Company organization. The information found here represents a user-created company that is a creative addition to the game.

Gamma Industries is a company.

Gamma Industries is a company in No Man's Sky.

Gamma Industries (or GI for short) is a covert organization mainly operating out of sight in several sectors in both Euclid and Eissentam. Gamma Industries specializes in several different tasks. Among military organizations, they are known to produce highly advanced technological components for complex and high-tech weaponry. They also uncommonly provide extra assistance in large-scale conflicts.

Their main focus is the development of tremendously powerful high-tech weaponry and combat vehicles. Only a handful of these prototypes and its technology are known to the public. Some scientists have claimed that Gamma Industries is using classified old and forgotten technology to enhance their heavily modified prototypes.

Besides the development of powerful weaponry and profitable trade, Gamma Industries' mission is mainly unknown as far as intentions go. Although rumored to have a strong link with the The Atlas, this has never been officially proven nor denied by any reliable sources.

Gamma Industries' headquarters location is located on the [REDACTED] planet of the Eissentam galaxy.

They are known to be very active in the system November-Zulu, and especially the planet Nitrition.

Company branch locations can be found in these regions:

Gamma Industries has the following branches:

The company's origin is mainly unknown.

Rumors claim that the company was founded to further reduce Sentinel activity across the galaxy to prevent unnecessary casualties, while at the same time developing weapons to fight back against any unknown threats yet to be discovered.

At the moment, they are developing powerful weapons and pushing the boundaries of technology to new limits. These prototypes are commonly used by GI-Operators for classified purposes.

As mentioned earlier, only a handful of prototypes are known to the public. Most of their specs and quantities are unknown.

Gamma Industries commonly uses basic exocraft as a framework for their land-based prototypes to build and improve upon. This has proven to be very-cost effective while still being able to effectively utilize its heavily modified components.

The "MTGS - Titan" or "Titan" is an Mining-Transport-Attack-Gunship (MTGS) used by Gamma Industries in occasions where a lot of firepower/support is needed.

Titans are equipped with reinforced shield layers, and the infamous "GI S6 Infra-Accelerator" prototype. This heavily modified weapon is capable of firing continuously for over 10 seconds without overheating. A significant downside to this weapon is that it is very big in size, and requires a lot of power to operate. They are currently equipped with dual hydro-cycling cooling cells that reduce the cool-down time and prevent burns to the ship shields.

GI is still working on optimizing this weapon.

A Titan has a lot of cargo space and is occasionally also used for transportation purposes. 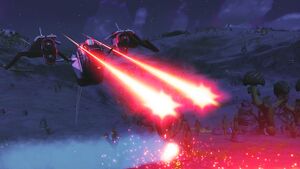 A Titan performing a strafe with its "S6 Infra-Accelerator" 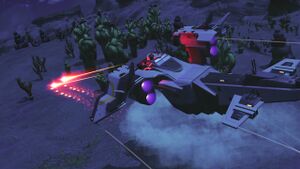 Gamma Industries is not partnered with any civilization at the moment.

We are open for collaborations and projects with other companies/civilizations and are looking forward to push technology to its limits.

(note: all prototypes/projects shown during a collaboration are subject to a non-disclosure agreement and are to be kept classified at all times.)

Gamma Industries' Discord is still currently being worked on.

Any interest in joining Gamma Industries and working with high-tech prototypes and projects can be sent to BlueTechRS#6365 on Discord.