Geks Moon is a moon.

Geks Moon is a Toxic moon in the Local Serenity AH system and is the former location of SpaceArtGeks base. It is a moon of the giant planet Desert Dreams.

During the Pathfinder era it was home to Research Lab and had many unique and infamous fauna. During Atlas Rises, it is still visited by players who stop and review the 30+ comm message that were placed. Gek has since moved his base to nearby planet Twin Vision. 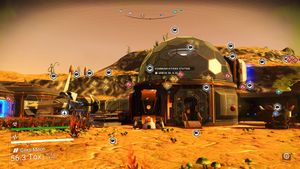 The pyramids where the base used to be located contain messages from travelers all over Euclid including an original exchange of messages from King Hova, NMS Survival Guru, Doglegsxr, and Boid Gaming. The area now has over 30 comms placed from travelers.