Geks Moon is a moon.

Geks Moon is a rare tropical Verdant moon in the Local Serenity AH system and was the former location of SpaceArtGeks base. It is alsoa moon of the giant planet Frozen Dreams and home to Research Lab It had many unique and infamous fauna and was known for it's vicious crabs and womps (aka bi-pedal creatures) 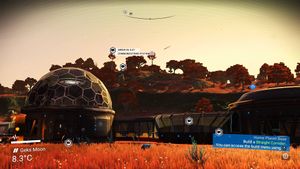 Geks Base with hillside messages

The moon used to be filled with pyramids where the base was located containing messages from travelers all over Euclid including an original exchange of messages from King Hova, NMS Survival Guru, Doglegsxr, and Boid Gaming. The base now has over 30 comms placed from travelers and travelers still visit to view all the comms from history. It was also home to the nomad race track

Tropical Verdant Moon: Landscape mostly thick grass and rock, red sections that interweave with green interrupted by pyramid rocks. There was a series of caves below surface and water beneath the layer of caves. 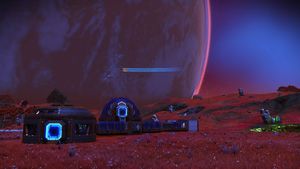 The climate and atmosphere of Geks Moon