GenBra: Budullangr is a Company Branch dedicated to exploration and documentation within the Budullangr galaxy all based within the No Man's Sky game. This page provides a place for Budullangr related info for GenBra Space Corp. 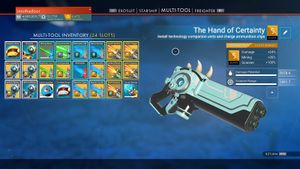 The Budullangr Horned Weapon
The Hand Of Certainty (24) S Class

This game is my newest started at the beginning of NEXT, but it wasn't that easy. The long story takes me back to the beginning of playing NMS, the start of it all. When I first began mid-2017 I didn't know what I was doing eventually Atlas Rises came and I went with gusto driving thru the story line and in not so slow fashion coming to end of the Artemis Quest line of the time which brought me to the Purge. This was the moment where a play decides to select one of four colored galaxies (what I didn't realize at the time was I could have backed out and stayed in Euclid). I choose Budullangr not knowing a thing and before I knew it I began my journey in this galaxy. I was in Budullangr for almost the entirety of Atlas Rises, building the New Hub Order and meeting some fun new Travellers. One of my greatest under-rated creations was the The Budullangr Hub Trail a 70 star system path that led players from all over the galaxy to the Core, but being in the seventh galaxy meant a lot less players to actually interact with. What happened NEXT was un-planned.

When NEXT started I found myself completely dead in the water, this game would not load and I could not play it, it took over a month until this legacy save (my oldest save) could play in Budullangr again.

Of course I still wanted to play so I started a new game but not in a traditional sense that most players experience. The BHUB was in full swing and there were about a dozen people helping establish star systems with the correct BHUB naming convention. At this time NMS was not fully patched or fleshed out and I will admit I took advantage of one little loop-hole (now not possible). First I deleted my Permadeath save (Thus that game save is retired but can be reached by swapping out game files) and I started a brand new Normal game while joining a friend (the in-famous Santa Goat), causing me to begin anew but in the seventh galaxy. Perfect! This newest save was quickly assisted by my fellow BHUB players and gained all needed supplies quicker than ever.

After my Legacy Bud Save came back online (Hello Games finally patched it enough) I had two game saves in the same galaxy which became confusing. Almost all NEXT Budullangr documentation was created by my Newest Bud save - the legacy Bud save was parked at the core and wasn't played much until things quieted down in the BHUB. Towards the end of 2018 AstromonsX and myself (both with Legacy saves at the Bud Core and Brand New saves in the BHUB) found ourselves looking for the next adventure, and that's when the Great Galactic Adventurers were born.

Because of the time I have been in this galaxy I have made it one of my priorities to remain active here, continue the journey throughout the galaxy and continue exploring the great green core.

During the NEXT/Abyss/Visions era GenBra worked almost exclusively to document and create the wiki documentation for the Galactic Hub Budullangr. Though not all discoveries were made by me (it was a vast team effort) I had my hand in most pages created for that civilization.