GenBra: Permadeath is a company branch.

This Branch is currently retired at the core of the Calypso galaxy.

Started near the end of Atlas Rises as a challenge to see if I could get to the core and earn the PS4 Trophy (which wasn't completely earned until the start of NEXT). I got side-tracked on my way and stayed in the Galactic Hub Project for a period of a couple months. Before I knew it NEXT was on it's way and I needed to prep the other Branches.

Of the GenBra Branches this one has seen the least amount of play time. Played for under 100 hours; however, the adventure has always been exciting. As most Permadeath players will tell you once you get past the initial crash and repair you begin to collect the needed materials and build a safety net around yourself. This makes play relatively free of issues. GenBra Permadeath is definitely the least wealthy branch, carrying only a B Class Experimental, and flying decent ships, we are not laden in gold or S Class like the other GenBra Branches. Still all glyphs are learned, money has been earned and bases have been established. As of now Permadeath has been put in partial-retirement at the Calypso core. 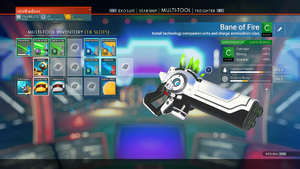 A beautiful Multitool from during Atlas Rises, unfortunately no documentation was made

It came to a point when I needed my Permadeath save; I wanted to keep it available to give Multiplayer rides across galaxies. This save will more than likely retire in Calypso.

Game Saves I have available: