GenBra 256 - Odyalutai Core Resort is a star system in No Man's Sky.

GenBra 256 - Odyalutai Core Resort is a star system in the No Man's Sky universe. This galaxy and star systems within are actually an out-of bounds area and no longer are officially part of the game. Using old game saves, (it is unknown to me how old the game was that eventually got us to this area, I previously thought only PC players using a game save editor could get to this location of the game) the only way to reach this galaxy and all systems within is to join another players game. Players do not reach this galaxy during regular play.

This system is part of the advanced exploration of GenBra Space Corp.

By PS4 explorer AstromonsX in January 2020. 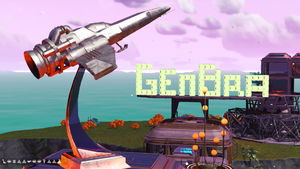