This Base is part of GenBra Space Corp. 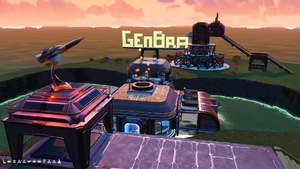 Welcome to 256... the Secret Resort is yours to explore!

This is an island resort which is built half in and half out of the water. Full Underwater research facilities are available along with an submarine (Nautilon) geobay. The island itself has a pool which extends deep in the water. There is a connecting tunnel (natural) which allows visitors access to the deep and sprawling ocean surrounding the resort

This is a secret base Resort which most players could never get to. It's exclusive in galaxy 256, and only reachable if you join a player already in the galaxy.