GenBra Proximus I Vault is a player base.

GenBra Proximus I Vault is a player base, located on the planet Aakit 61/V3 in the HUB1-E4 Proximus I system.

This Base is part of GenBra Space Corp built within the Galactic Hub Budullangr. 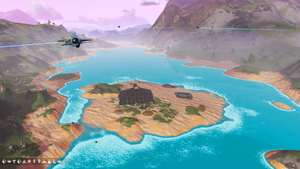 Hard-knocks Pyramid style, the interior is simply powered and has 10 storage containers full of needed treasure.

Has several Landing Pads, and Terminus transport, has enough battery power to last the night. Most notably this is GenBra's main vault which at current publication has around $40 Billion Units worth of Stasis Devices stored, along with other precious items.