Genesis 1:3 is a planet in the Ubaksaro-Gebi X system of the Abikov Anomaly on No Man's Sky.

It is a beautiful Lush (Overgrown) planet with islands covered in blue grass and surrounded by enormous oceans. 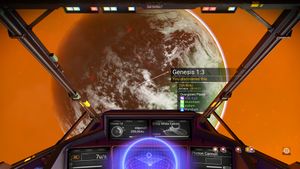 The standard resources that can be found in this planet are:

In its oceans, plants of Kelp Sac can be found.

NOTE: Some of this species are remnants of the Pathfinder's era, and may be extinct.

The fauna at Genesis 1:3 is rich for any kind of animals: terrestrial, flying and aquatic. But travellers have to be careful, as there are several aggressive species of the Tyranocae genus on the ground, and a carnivore species on the seas: the Adnameumii Intep.

Other very notorious species are the Uctus family of sporeflies, pertaining to the Rhopalocera genus. Very difficult to see because of its small size and shy nature.

As a lush planet, Genesis 1:3 has developed a beautiful scenery. Its terrain is covered with plenty of blue grass, and in its oceans, coral reefs form an marvelous ecosystem.

Genesis 1:3 doesn't have tall trees, but it is filled with bushes and flower plants. Star Bramble can be found or grown in this lush planet, as its Star Bulb fruit can be used in the creation of Poly Fibre.

On the bottom of the seas, there can be found several types of algae, sponges and Kelp Sac plants.

The seabed is full of rocks covered in coral, and with deep underwater mountains. This planet also has long cave systems.

The weather on Genesis 1:3 produces heavy rain at several times during the day, when the temperature can lower to dangerous conditions. And because of its high humidity, the ambience is covered in haze. This can make sight at long distances difficult.

At day, the skies are blue with white clouds and when the night falls, it turns black with orange clouds.