Gloss X is a planet.

Gloss X is a medium temperate planet in the star system Eafort XVIII on PC Version No Man's Sky universe. Despite being quite a nice lush planet, it is quite a dangerous due to the high amount of hostile fauna waiting to attack their next prey.

This article is a work in progress. 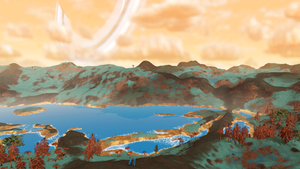 Gloss X has the "Honeycomb" terrain archetype. When viewed from above, the terrain seems to form some sort of hive-like or honeycomb land patterns.

Walk around and kill predators.

After a deadly civil war, the capital has moved from Rahaka Tau in Karlan-Belo XIX to this one.