From No Man's Sky Wiki
(Redirected from Glyphs)
Jump to: navigation, search
The subject of this article is from the Living Ship update.
The information from this article is is up-to-date as of 6 April, 2020.

Glyphs are used when operating a portal. 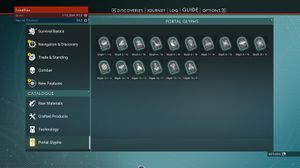 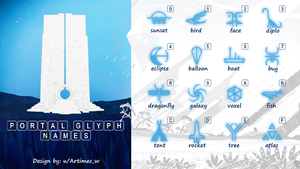 Glyphs are symbols on a portal's wheel. They are also referenced in-game in Menu → 'Guide' tab, and they can be scanned from screenshots with the Camera Button.

An Atlas Rises portal has 16 inscribed symbols on the outer ring. When dialing, this outer ring rotates until the dialed symbol is aligned with the top position, at which point the ring pauses and the same glyph displays on the game HUD.

With 16 symbols to choose from and a 12-symbol address, the Portal network since Atlas Rises has

However, not all points in space represented by these addresses have Portals; indeed, there are sufficiently few valid coordinate sets that randomly dialing the portal results in a roughly 1 in 10 chance of working.

All Portals since Atlas Rises use a Portal Terminal to enter addresses.

You can mainly find them by asking travellers where they came from. This will lead you to a Traveller Grave in the system that then can be searched to get a new glyph. It is possible to find a grave without asking, but they are rare and easily missed.

Using Analysis Visor shows them as Unknown Grave indicated with

Players will also learn all 16 glyphs during the Artemis Path mission, The Purge, without discovering Unknown Graves.

Table of correspondence for Glyphs:[edit source]

To display a 12-symbol portal address on the wiki, this sample format can be used. Simply use the glyph IDs in the proper order.

To produce this visual:

Among the resources of the game an image was found with "Glyph X". [3]. This texture is not used anywhere in the game, and the purpose of this asset is unknown.