Gokomur is a star system in No Man's Sky.

Gokomur is a star system in the Varriyfo Fringe region of the Hilbert Dimension. It used to be the capital of Vareryforba until the Second Great Warp.

By Vareryforba Ambassador nano912 in September of 2016. The subsequent discovery of the neighboring Home System is considered as the birthdate of the Vareryforba Expanse as a civilization. 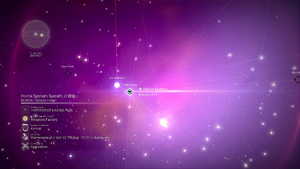 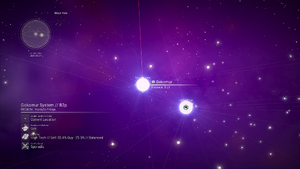 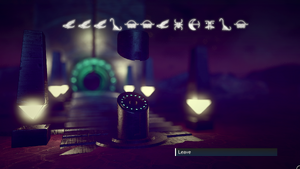 Gokomur has another B-type star very close to it (3ly), Home System. This constellation, named the VF Twin Stars, is at the center of the Varriyfo Fringe and is surrounded by discovered systems. Gokomur is 235ly away from the closest Black Hole, Liaiut and 268,934ly from the center of the Hilbert Dimension.

The Gokomur System was the first System in the Vareryforba Expanse (The modern Varriyfo Fringe) to be colonized.