From No Man's Sky Wiki
Jump to: navigation, search
This page fills the role of Embassy for the Grand Conjunction of Aligned Systems Civilized space community.
The information found here represents a user-created civilization that is a creative addition to the game.

The Grand Conjunction of Aligned Systems is a civilized space community. 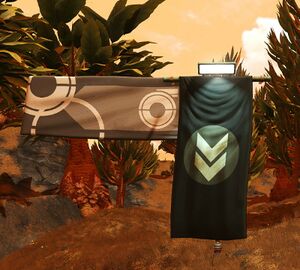 Official in-game flag of the Grand Conjunction, registered with the Federation Vexillology Department.

Its primary territory straddles the border between the Gwriginni Conflux and Daclivun Spur regions of the Euclid galaxy, but it also has various holdings throughout known space. Its official embassy is on the planet Viss-Hallr liw'Ofroer in the Woden-Fehu fjo'Folr system.

To date, the GCAS has documented 448 discoveries including 175 species of fauna, 160 planets and moons, 39 star systems, and 8 regions.

The Grand Conjunction's mission is to decipher the mysteries of the universe through exploration, research, and documentation.

The civilization first started before the Dawn of Foundation in the Daclivun Spur region, with its capitol in the Adhr-Pertho fjo'Folr system on the Eden World Cyanotopia. During the Age of the First Galactic Reset, beautiful Cyanotopia was reduced to a toxic wasteland unfit for habitation and its people scattered to other realms. They remained scattered until living ships appeared, gathered those long lost, and united them once again. Thus the Daclivun-Gwriginni Alliance was born, which quickly blossomed into the Grand Conjunction.

Members living in the immersive Gwriginni Conflux and Daclivun Spur core regions are strongly encouraged to name planets/moons/systems/interesting creatures with a Nordic theme, following the official Naming Convention of the Grand Conjunction. Special systems and planets may deviate from this naming convention as long as they remain immersive. Minerals, flora and lesser fauna are normally left with their default names, except for any truly exotic finds worthy of greater attention. Due to immersion being of strong importance in these regions, the addition of civilization tags is discouraged. The only exception to this is officially sanctioned embassy-systems from other civilizations, in which case it is preferred for them to use their own naming convention in order to keep the feel of their culture intact.

Members living in the less formal Heyllia region and other outlying regions/systems may name any discoveries as they see fit, as long as they are not derogatory or offensive. While by no means required, if residents wish to add a civilization tag to the name of a discovered system, it should be formatted with the following prefix: "(GCAS) ".

Grand Conjunction membership is currently invitation only, although all individuals found living within Conjoined Space are considered citizens. Membership invitations are reserved for players whom we meet in game and regularly play with.

Being a meritocracy, all potential alliances shall be considered based upon the other civilization's overall contributions to the greater NMS community. Any potential alliance must also revolve around a specific research, documentation, or other scientific project with clearly defined goals. Exceptions may be made for individuals showing exceptional merit in another form, or for other civilizations which also focus solely on research and documentation, each on a case by case situation. The GCAS shall refrain from entering in alliances with civilizations deemed overly aggressive or actively supporting of illicit activities (those categorized as Militant, Smuggling, Piracy, etc.).

The following additional systems have been discovered and documented within Grand Conjunction space:

The Grand Conjunction keeps a log of their Scientific Contributions which details their major discoveries and contributions. In addition, the GCAS also created and maintains other more specific scientific projects including the following.

Times listed represent each Recurring Space Encounter's spawn time from the moment of entering their system.