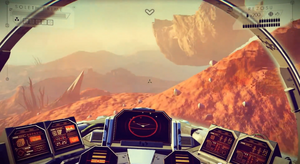 Gravity is a game mechanic.

The idea of gravity is treated in various ways in No Man's Sky. While planets will orbit around their stars and moons around their planets, the effect of gravity on the players will be minimal. In an interview quoted in Eurogamer, Sean Murray says:

Even with orbits, the rules have been modified for game play. Moons will be able to orbit closer to their planets than the laws of Newtonian physics would normally allow. In our universe, the moon Phobos is likely to break up in the future once it gets too close to Mars.

It remains to be seen how gravity will affect specific objects on a planet. For example, if a player uses their multi-tool to destroy the bottom half of a rock structure, the remainder of the rock will float in mid-air.

Planets and their Stars[edit | edit source]

It is theorized that planets in the No Man's Sky universe orbit a lot differently than that of our universe. Planets rotate on their axis much quicker than in reality, and thus the day cycle is a lot shorter. All planets exhibit a phenomenon known as tidal locking, meaning their revolution period is equal to their rotation and therefore their day/night cycles are dictated by their orbital paths. This is why, as the star moves in the sky, planets visible from another's surface do not move; however, planetary shadows do.

It's also a key factor in Space station orbits, as they may not orbit a planet directly, but rather a collaborative effort of forces from the star and the planet, as well as any moons the planet may have.