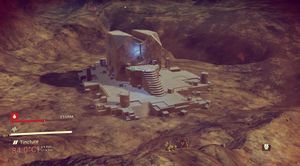 Monolith found on the planet Tincture

The Great Monolith is an important feature found in the ancient lore of the Vy'keen race. While the actual appearance and makeup of the Great Monolith are unknown, it appears to have been a sentinent entity of some kind, a guardian of ancient knowledge. The chances are likely that it was a portal connected with the Atlas.

One of the early giants of Vy'keen history was a leader named Hirk the Great. During his lifetime, great concern was felt among the Vy'keen concerning the Sentinels and how their presence interfered with "the virtuous Vy'keen crusade" against the galaxy. Hirk approached the Great Monolith, and according to legend, called upon it five times to answer him. Receiving no answer to his challenge, he called a sixth time, and this time, the Monolith awoke.

When it spoke, the Great Monolith told him about the Travellers that would come in the future. The Vy'keen were not to interfere with them, as they were to prevail in the galaxy. "There should be no need of blood for our meeting, we are but a dream in an infinite universe." After hearing this, Hirk then asked his real question, "but what of these Sentinels?" This question was met only with silence, making the ruling of the Atlas over the galaxy all the more apparent. Needless to say, this troubled Hirk.

After returning to his people, Hirk told them what the Great Monolith had revealed about the Travellers, and it's refusal to comment on the Sentinels. Seeing their displeasure at this, he used his own power among the Vy'keen to call for an all-out war to eradicate the Sentinels. This war was won by the Vy'keen, but both sides were so weakened by it that when the First Spawn of the Gek made their strike against Korvax Prime, there was no one to stand in their way and prevent the massacre that followed.

Today, the memory of the Great Monolith is memorialized by the Monoliths found on various Vy'keen planets.