The Greater Mushroom Beetle (GMB) is a category of fauna. 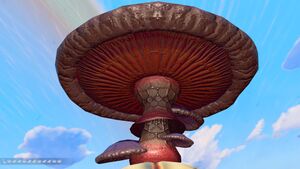 The fungal symbiote which defines the GMB, as seen on the O. Pathosesacima species. Appearance may vary slightly.

This creature is a Greater Mushroom Beetle (GMB), a subset of the Conokinis / Bos fauna genus. The subset is highly sought after by explorers due to its rarity: GMBs are generally regarded as being even more rare than megafauna diplos.

The GMB subset was first defined by 7101334, and (unlike the various Genera) is a player-created category, not an actual part of the game code. The first known discovery of a GMB was on November 7, 2016 by Cernunok.

A Greater Mushroom Beetle is defined by the presence of a full-fruiting-body fungal symbiote. In other words, the beetle must have the whole mushroom shape on its back, the stem and cap. A beetle with only a mushroom cap but no stem is known as a Lesser Mushroom Beetle (LMB). LMBs, while still rare, are not generally considered as noteworthy.

It's important to note that the "Greater" in "Greater Mushroom Beetle" has nothing to do with the actual size of the animal. It refers strictly to the type of fungal symbiote.

This category is reserved for GMB's that can no longer be found in-game.

This category is reserved for GMB's that were not fully documented before they became extinct.