HUB-G-79 Yoarsoja IX - Warp,Portal,X.Ship (pronounced Your So Jah Nine), is a Black Hole star system in the PC universe of No Man's Sky located in region Hegesn, formally know as the Hegesneyr Boundary in the Hilbert Dimension.

After being discovered and named Yoarsoja IX in 102017 by Interlooper Jazek7 flying a Kaokayab S80 F/S Class, Pirates infiltrated the High Hegesn Council during the Renaming Days. They exposed the Save Data Relay Conductors to a mixture of Thermic Condensate and Raegon-214, corrupting the GHPs formal naming HUBhb-G-79 Yoarso'ja Warp Gate IX to just HUB-G-79 Yoarsoja IX showing their power and influence in this territory previously controlled by them.

The Comity of Inquiries conclusion stated that had more advance warning systems and knowledge been in place, the Pirates interception of Gek Charm shipments (when welded by the Gek collectively protects them from disasters and misfortune) could have stopped the infiltration of this system's highest government.

HUB-G-79 Yoarsoja IX aka HB79, has a current conflict level of Sporadic or Medium. After the events of The Format Entanglement, the Yourso'janese formed hunting parties in large fleets reducing the threat by almost 40% with the cooperation of surrounding systems. Relations have improved between the Hegesn and Gonyayp regions and have stabilized. 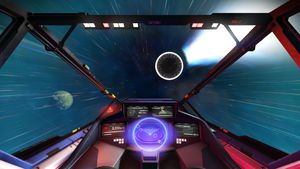 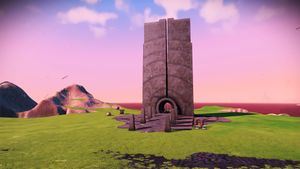 The Yoarsoja Portal is located on the Verdant Planet of Outpost Saitahira Islands.

A Signal Booster, Communications Station and Save Point have been installed for exploring Interlopers.

Below are the Portal Glyphs used for this portals.

This star system contains five planets and one moon: 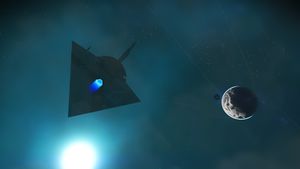 In the space station you can buy the following blueprints for your starship:

In the space station you can also buy the following from the Galactic Trade Terminal:

This page is part of the Galactic Hub Hilbert project