[HUB-K-C2] iVc TradePort:054 is a star system in the Eapustafiges Adjunct that serves as a bridge between the iVc Project and Galactic Hub Project.

It was in this very spot in quiet reflection after this Thread that Traveller afWngs had the idea to co-launch the meta-group play effort that would become the Alliance of Galactic Travellers. 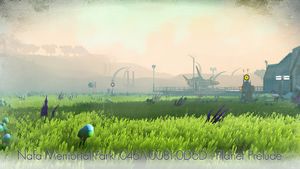 An Outpost Trade Port is available on planet Bach