HUB1-!-68 Eidolon Prime is a star system in the universe of No Man's Sky universe.

This System was named after a guild that existed in a long lost realm. Upon waking in this Universe all Keshian_rade wanted to do was rebuild the name of Eidolon Umbra. To be a quiet helper. To be like a phantom, working from the shadows.

Originally intended to be a quiet base it has since become famous across the Hub as one of the few ways to get a guaranteed "Squid" Exotic Ship. Interlopers have been known to cross the Galaxy for the chance to acquire this grand Ship.

Some Interlopers have started to refer to this system as "The Magical Station of Eidolon."

It is located in the Shungka Void of the Euclid Galaxy. 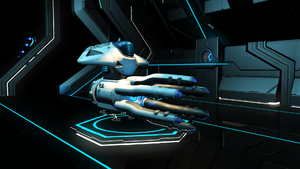 During the Atlas Rises era, at least 7 Reddit users (Keshain_Rade [discoverer], 7101334, Ragecalm39, swank5000, Pawnia, curtisf08, and rwhitby) reported this ship to be the first ship to land in the space station either after landing their own ship there, after they warped back to the station using the Teleport Terminus, or after they reloaded a save while in the Space Station.

Many also reported the ship was "re-rollable," meaning you could repeat your technique to possibly obtain a more desirable layout than the first one that you see.

Because this ordinarily-difficult-to-obtain Exotic starship is apparently so easy to obtain here, some Interlopers have taken to calling this "the Magical Station of Eidolon."

The best version of this ship available here is 20 + 6 slots.

Galactic Address for Planet Uhankoundi Wavesu is as follows, or you can go to this link for the glyphs: NMSPortals

This system is located in the upper portion of the Shungka Void, about 35ly away from the nearest Dizele Void system.