[HUB1-!X-10B] Hexomia (Hexagon Biome), or simply Hexomia, is a star system in the No Man's Sky universe.

It is located in the Shungka Void of the Euclid Galaxy.

Materials found on Hexomia's planet and moon include cymatygen, copper, and iridium, among others. Larger asteroids sport iron, copper, and sometimes gold.

There are no trading posts in this system; the trade route lines that usually mark these locations therefore pass straight through the sole planet. The only surface trade terminal in the system is at Nexus' Navel Base.

As its name suggests, Hexomia is unique because its only planet is covered in hexagonal plates.

Discovered at an unknown time by Steady_Handz on PC.

This system is not known to feature space crystals.

Due to the fact that another player discovered the system before this article was written, the system tag is [HUB1-!X-10B] in-game, indicating that at least one planet hosts hostile sentinels. This is not the case. 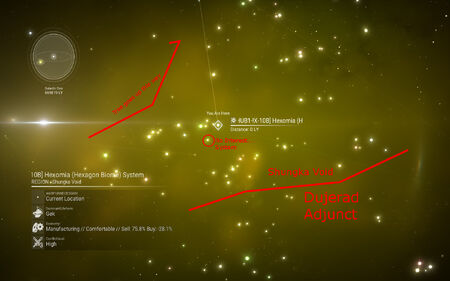 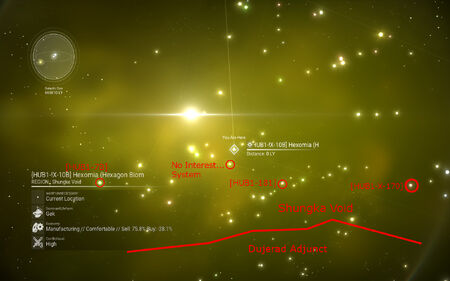 Hexomia is within what appears to be the second "layer" of stars from the base of the Shungka Void region. There are two green systems very close to Hexomia as well as another blue system. One of the green systems, No Interest..., is slightly below Hexomia. There are not many stars laterally clustered in this part of the region, so use of the economy scanner to filter the star colors may help.