Mamtudure is a star system.

Mamtudure is a star system in the No Man's Sky universe. This is the former site of the epic river canyons base. This article documents how the planets would look like with the galaxy type override / biome changing glitch. This is what happens when loading a save file in a tranquil galaxy first, then loading another save file in an imperfect galaxy afterwards. The result is this, a tranquil galaxy version of the Mamtudure system.

On PS4, this system is known as Unknown.

This system has nice ships. 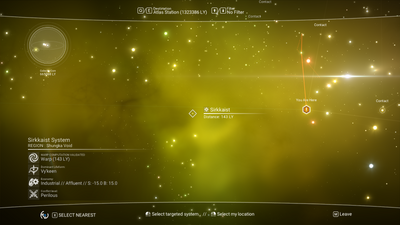 Mamtudure is in the Shungka Void's cloud region and is located right next to the Eyrint Fringe. It's a Korvax system with an advanced mineral economy and tranquil levels of conflict.