Hatipicae Reges, the smaller of the two primary predators found in this system. Capable of taking a shield down in 2 - 4 hits.

[HUB1-116] Pagan Glory II is a star system in the No Man's Sky universe. This system's primary attractions are two species of large, predatory Procavya species, a variety of Cycromys bird species (including two butterfly-winged species), and its Fighter starships.

Position of Pagan Glory II relative to TopOfTheTree2. Note the "You are Here" marker in the upper left part of the image. 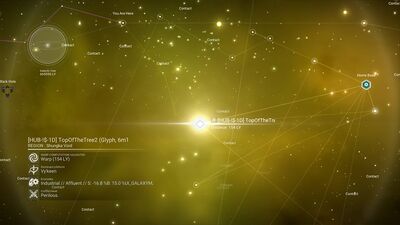 This system is located 154ly from TopOfTheTree2, and 295ly from the Waolab Anomaly black hole, HUB2-!-79 Outlaw's Run, in the upper ("cloud") portion of Shungka Void.