From No Man's Sky Wiki
Jump to: navigation, search
The subject of this article is from the Living Ship update.
The information from this article is is up-to-date as of 6 April, 2020.
This article was catalogued by the Galactic Hub.

HUB1-151 Hoder is a star system in the No Man's Sky universe.

This system is a part of the Galactic Hub Project and hosts GenBra Space Corp's Defense Branch: GenBra Defense Systems.

The flagship Planetary Electromagnetic Weapon - P.E.W. Base is located in the system on Nonjo 58/16.

During the last days of Atlas Rises the Galactic Hub Project was under threat from various outside forces. The talk of multiplayer combat in NEXT excited a portion of the gaming community. At that time, PVP battle in NMS consisted of Base overwriting or more likely, rudely named star systems or Communications Stations. So with the beginning of NEXT the Galactic Hub Council took the opportunity to move to a new unexplored region. In an effort to thwart any ill-mannered naming within the 'new' HUB1 region, they established The ARK Program. The ARK Program's goal was to name every star system within the HUB1 region, giving approved and selected individuals early access to the new location. GenBra Space Corp was granted this access and had a goal of only securing a system or two for use as an Euclid office.

NMS NEXT and the ARK Program began on 7/24/2018. I had a late start but by 7/29/2018 GenBra had secured two un-named star systems. By 7/31/2018 HUB1-152 reverted to a different system name and discoverer. HUB1-151 held out for another week as HUB1-151 Gervin (GenBra Duo) but eventually reverted to it's current name, HUB1-151 Hoder. I list this system as co-discovered because the NMS servers weren't very good in the early days but ultimate discovery credit goes to PS4 player Syn1334.

GenBra has maintained a base in this location and that of it's brother system HUB1-152 since those early days.

This system has a companion star HUB1-152 Bragi, which is incredibly close. 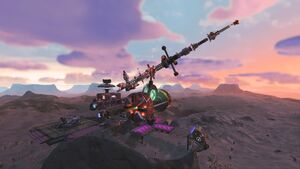 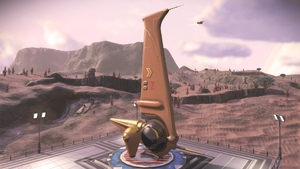 Note: These images were taken during the Visions update but the ships are still the same, there will be differences in stats.

This was the Living Ship which spawns in this system.