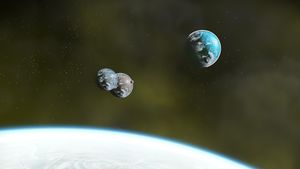 HUB1-202 Ossiriand is a star system in the No Man's Sky universe, located in the center of the Galactic Hub. Of its four planets and one moon, most notable is Rathloriel, a lush oceanic planet with 5-meter diplos and home to the Rathloriel Run racetrack.

Ossiriand is named for the Middle Earth region of the same name, and each planet is named after a river within the region.

The article's main photo shows Ossiriand in relation to three black holes as explained in the caption. Ossiriand is 71 light-years northeast of the Shungka black hole, if the galactic center is imagined to be north. Ossiriand is slightly lower than the black hole in elevation.