From No Man's Sky Wiki
Jump to: navigation, search
The subject of this article is from the Visions update.
The information from this article is up-to-date as of 13 August, 2019.
This article was catalogued by the Galactic Hub.

The star is a yellow main sequence star that does not require a special Hyperdrive to reach.

By Interloper Erico on PC. 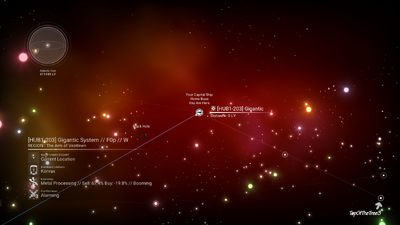 Gigantic is located near TopOfTheTree3; it is marked in the bottom-right corner in the picture above.