[HUB1-21E] Veggjoro I is a star system in the No Man's Sky universe.

It contains two planets. One is an extremely radioactive world, and the other is a scorched world. Both house extremely hostile Sentinels.

Explorer SeraphimRisen discovered this system on 27th September, 2019. They warped into system in their ship, HFX Tenebrous, and initially settled down on Evueta. After a trek across this world to document its life forms, they lifted off and moved to Hicombe, where they found members of genus Rangifae and a portal situated in a gorgeous lake valley. They called their freighter, HFSC Unyielding Hierophant, into orbit and began setting up a base. Today, this is the system they call home, having moved here after finding no suitable home in Euclid or Budullangr. Eventually, they moved on, reducing the grand home here to an armory instead. 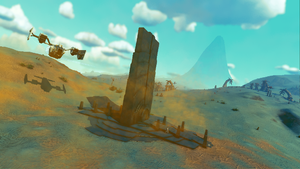 Seraphim Risen performs a flyby of the portal on Evueta.

The system has two portals. Their address glyphs are as follows:

Veggjoro I was never charted by any of the galaxy's major factions. As such, it has no space station.

Visitors are highly advised to bring combat-ready equipment for any planetary explorations. Both worlds in Veggjoro I are host to extremely hostile sentinels. Strong radiation protection supplies are also recommended for Evueta, and some degree of heat protection for Hicombe.