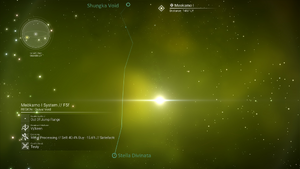 All six minerals used in crafting of both $18mil Fusion ignitors and $18mil Stasis Devices are found on the planets in this system, along with all the possible Type II Plants since the system has all 6 biomes (except dead and exotic) present on its planets.

Amazing view of the ocean from the tower atop the base. The base itself is located almost at the top of one of the many tall islands dotting the archipelago. Docking bay for a Nomad is also located within the base perimeter. Beneath the base, there are many caves filled with Marrow Bulb and Iron deposits, leading to the shore of the ocean. There is also a Galactic trade terminal located in the default cylindrical room. All types of plants grow here, inside the Glass domes. There are eight Carbon planters in the separate glass cuboid building within the base.