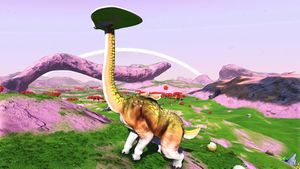 [HUB4-AE] Cetra is a star system in the No Man's Sky universe. Its main attraction is the Oustiia Vorag diplo species.

September 2017 by Interloper ButterForTheKing on PS4.

This system is located on the border of the empty space between the lower half of the Dizele Void, the Eyrint Fringe, and the "tree" sub-region of the Shungka Void. It is roughly level with the middle of the tree sub-region.