[HUB7-12C] Avolzh is a green star system in the No Man's Sky universe.

The system is quite peaceful, with pirate attacks occurring quite rarely. However, its planets are anything but peaceful, as both of them are extreme hellholes. 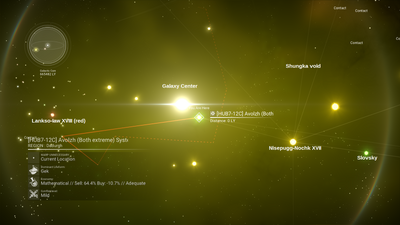 The picture above shows the star directly facing the Shungka Void, with the galactic center left of it. Search for this view at the lowest area of The Dirge.

Avolzh is a green star and is in the lowest area of The Dirge, located close to Nisepugg-Nochk XVII and the Tiessze Terminus below. It should be relatively easy to locate. It's a green, 2-planet Gek system with a adequate mathematical economy and mild levels of conflict.

A player base is built here. It is a community farm and racetrack. The farm produces materials enough for 6.5 Circuit Boards and 4 Living Glass per hour. A rather difficult racetrack, The Six Deadly Rocks nomad racetrack is found here.