Haen Quilliams is a planet in No Man's Sky.

Haen Quilliams is a planet in the Qitand-Kouth star system in the No Man's Sky universe and colonized by The Qitanian Empire. 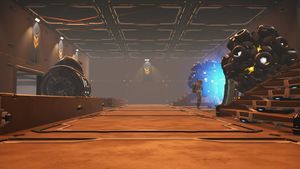 Teleporter at the Qitand-Kouth Ahok base

The Qitand-Kouth Ahok base is both a "last stop" station for travelers that want to reach the galactic core and a popular recreation area with luxurious apartments for citizens of The Qitanian Empire. 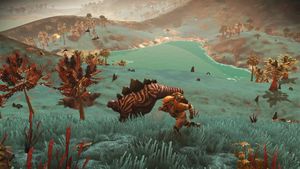 According to ancient Qitanian legends, the founder of The Qitanian Empire and civilization, Qitan, was born on this planet. After his mother Yelah, a woman of Dshoneekashian descent, had received him from "the Good Light of the Core", she attempted to meet the Light at the center but failed and died on Haen Quilliams right after giving birth to her son.

The Good Light then found Qitan surrounded by peaceful animals who had taken care of the little boy, and it froze time for ten thousand years to mourn Yelah’s death right as the sun went down.

This phase was later referred to as “The Golden Sleep of Qitan” (Qitand-Kouth Ahok), which is also the name of today’s nearby base. During this phase, The Good Light supported Qitan’s mind and body with its power and knowledge to make sure he would grow up to be a wise and powerful man who could lead his people into a bright future. It then returned him to the people of Dshoneekash, where he became the popular and respected leader of a wealthy and peaceful civilization.