Heridium is a resource.

Heridium (Hr) is a member of the Silicate elements resource family.

Element used in the creation of components vital to space exploration. 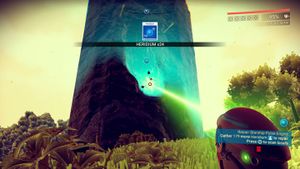 This element is found in planetary terrain and caves. Often highlighted by holographic cubes in user's visor after local scans. Their normal spawn appearance is a tall square column jutting out of the ground. In rare cases extremely larger deposits can be found as frozen "lakes".

Like other resources, Heridium can be traded for units, as seen on No Man's Sky - Gameplay Trailer | PS4. In the trailer the player can be seen landing their ship on a platform on the planet Achaia, exiting their ship, and shortly after the notification "-3.2 HERIDIUM" appears on screen. Moments later the notification "+1357 UNITS" appears on screen, indicating that the resource has been exchanged for currency. It is likely that the player visited a Galactic trade terminal to make this transaction.