Hicombe is a planet in No Man's Sky.

Hicombe is a planet in the star system HUB1-21E Veggjoro I in the No Man's Sky universe. It was discovered shortly after its sibling planet, Evueta. While traversing the surface in a Nomad, Seraphim Risen stumbled across a local Rangifae specimen. Immediately excited, they located a nearby monolith and documented everything on the way. Despite the best efforts of the planet's overzealous Sentinel patrols, they reached the monolith and discovered the portal, located in a gorgeous lake valley. They immediately called their capital ship, TCS Unyielding Hierophant, into orbit to begin construction on their permanent home. There are still one or two undiscovered species of fauna on this world.

Hicombe is a scorched world with hostile sentinels and extensive oceans. Much of the surface is covered in a grey, rocky continent. The planet also has vivid blue oceans and lakes, though. The occasional firestorm sweeps over the surface. While these don't bother local fauna or flora, they can pose a hazard for visiting interlopers. The real danger lies in the planet's hostile sentinel patrols, which interrupt almost any activity attempted. 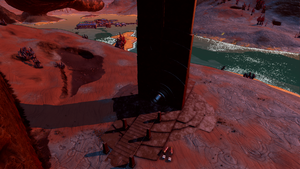 Seraphim Industries, the corporate side of Seraphim Risen's space exploration, maintains a small armory-style base here. There is an armorer's terminal as well as a nearby Nomad geobay. It is on the shore of a large lake valley, located at -29.09, +106.40.

The portal is on the shore of the same lake. It shares this valley with many specimen of Z. Ornikidis. It is located at -29.37, +106.74. This valley used to be home to the now-defunct Neusi-Alha Colony (In), which was dismantled and spread out over several systems to decrease base size and complexity.

The following glyphs are the portal address for this location.

Hostile patrols of sentinels pervade every facet of life on this world. They interrupt almost any activity taking place outside. The only places they seem to avoid are the deeper lakes and oceans, and caves.