Holly's Blue Moon Paradise is a moon in the HUB-G-1E6 Dancing Bear system.

This beautiful moon circling around the planet Tranquil Rock, is home to 8M+ tall masked bear-like gentle creatures that appear to sporadically stop and exalt the day or weep into their paws. With magnificent afternoon sunsets, along a heavily canal-carved watery world, there is a diversity of terrain from darker earth patches, to low tide sunny beaches, and towering cliffs surrounding deep waters. Half water-filled caves make for a fun excursion for adventurous visitors, and there is plenty of rigogen naturally occurring in this temperate climate. All the basic life-minerals are present as well as occasional clusters of titanium and chrysonite.

Many small animals roam free, with only one sporadic predator. Along with the big bears there is a large beak-nosed quadruped - also friendly. At least three forms of aquatic life: small swimming beavers, some tiny eels and one mean larger predatory fish usually found in small numbers–or solo–in deeper water. 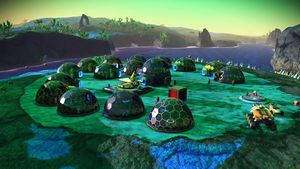 Dancing Bear Base is constantly re-configured and recently upgraded (5/14/17) to an Albumen Pearl farm containing 211 pearls as a community resource. The Galactic trade terminal in the main habitat will handle sales locally for around 19,995 units per pearl, or a total harvest of roughly 4.3 million units. Allow 20 minutes for harvesting time. Greenhouse domes are numbered and color coded since it's easy to lose track of where you are.

Visitors are encouraged to use the Landing Pad, as the base is on a small peninsula surrounded by water.

Two Trading Posts lie just west of the base within a minute or 90 seconds of fly time. Just over the cliff where you'll find several comms at the top is another Galactic trading ball offering a Dimensional Matrix for sale. The Galactic Trading Ball at the base also sells AquaSphere

Collection of findings from Holly's Blue Moon Paradise. Bear families often roam together. Females seem to have the more ornate masks with the two horns at the top. Males have a smaller mask. There is a high-slot (37) needle-nosed yellow fighter A Class that routinely lands at the trading post further from my base (the two are within half a minute of each other about 60 seconds of flying time from the base to the left if you are standing on the launch pad and looking at the base hut.) Probably lands as an S class if you are willing to wait for it.