Hoth is a planet in No Man's Sky. 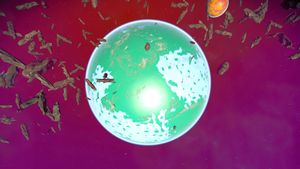 Hoth, as seen from space.

Hoth was the capital planet of the Empire of Phantomium Marxium civilization in the Visions Era. It is located in the Revoltwo-Kepler I star system.

The Star system itself is located in the Gocutul region, Beta Quadrant, of the Euclid galaxy.

A certain region of the planet overlooking an ocean has been mostly populated by the EPM while it served as the capital, at approximately these planetary coordinates: latitude/longitude -11.52, +100.06

Hoth is a Frozen planet. The weather consists of Wandering Frosts, meaning that storms occur regularly on the planet. Resources on the planet are also scarce, players will have to come packed with resources for survival beforehand. During construction hours, no predators have been reported so in that regard the planet may be considered safe.

There are no moons orbiting Hoth.

Other than no longer being the capital of the EPM, there are no recorded differences in the planet itself.