[HUB1-63] Gadureyr III is a star system in the No Man's Sky universe.

It has not yet been uploaded or renamed to conform to Galactic Hub Naming Guidelines as the system survey is still incomplete. In-game, the system is still shown by its default name of Gadureyr III. A mission has been submitted to the new Galactic Hub Mission Board to finish surveying the system. Four fauna across two planets have evaded detection so far. 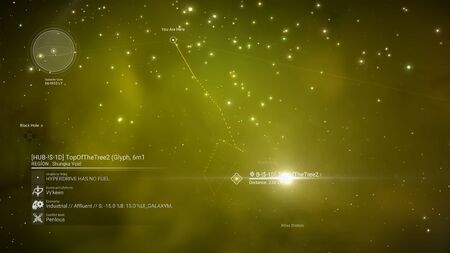 The system is located in the upper cloud region above HUB1-!$-1D TopOfTheTree2. Facing the center, Gadureyr III is roughly 238 LY away and 10 degrees to the left (possible to have them both on the screen at the same time). Surrounded by mostly yellow stars, a red star system (Phillipa eilhart) is about 26 LY to the right. Blue star system Triss vs Yenneferer is 46 LY away and only very slightly below the target.

In the above image, "You are here" is Gadureyr III.