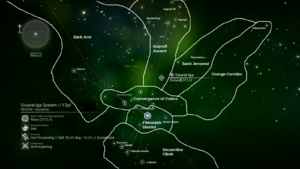 Chaotic Hurenima and its 7 sub-regions.

Hurenima is a HUGE and very chaotic region in the Eissentam Galaxy of No Man's Sky. While it can be divided into 7 distinct Sub-regions, navigation still remains a serious pain due to the highly disorganized nature of the region. The sub-regions are, from the lowest to the highest point:

This region is home to the Black Cloud Commonwealth.

Hurenima is located in a very, very dark region of space, and is much darker and larger than the already massive Afuthro. The colors surrounding the region is dark green, but there seems to be a cloud of dark matter and dark energy enveloping the region, making it seemingly invisible, in a similar fashion to Afuthro. The cloud however, is composed of extremely dark and powerful energies, preventing outside contact and travelling into or out of the area. However, once inside the dark cloud, one will notice the region having a blue glimmer, something that regions in Euclid don't seem to have.

Aside from Korvax, Gek and Vy'keen, there is a seemingly never-ending variety of races. There are cat-people, sentient blobs, gummy bears, androids, humanoid insects, frog-like humanoids and more. Ezegnegch is the first and currently, the only Kinderkin in the region.

Despite the great variety of races, cultures and beliefs, Hurenimans have these in common: They're a reserved and taciturn bunch, valuing peace and prosperity above all. However, they have great curiosity of the world outside their home region. Currently, there is a split between those who want to explore outside, and those who wish to keep the region secret.

There is no official religion, but the most dominant form is a religion with seven gods, each governing the seven sub-regions.

The region is quite wealthy overall, with many high-wealth systems. However, majority of these systems are still corrupt and entwined in conflict to this day. The government is currently and for the longest time, in a relentless and deadly pursuit to search, destroy and kill all evildoers.