iVc Alpha Beacon is a star system in the universe of No Man's Sky.

It has been named by the InterGalactic Voyage Corridor using Galactic Coordinates. The system name in-game is iVc:04D7:0081:02A7:a

The name signifies that it is an iVc system (iVc) : identifies the coordinates for navigational use (04D7:0081:02A7) : and identifies the Quadrant is Alpha (a). 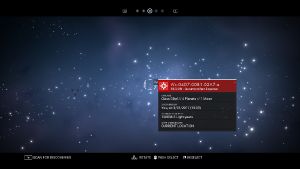