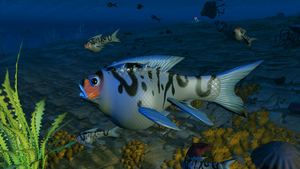 Ictaloris is a genus of fauna in No Man's Sky. Generally referred to as fish (the term used by the game code), worms, or similar terms, depending on their physical appearance. Ictaloris species are found exclusively underwater, and are never predatory. Although they may be found at any depth of water, they will sometimes have issues spawning in very shallow pools, either not spawning at all or exhibiting glitchy behaviour.

Ictaloris have two major variants, with a wide variety of diversity within each subgroup.

At one point jellyfish were a subtype of the Ictaloris genus, but were expanded into being their own separate genus Chrysaora with the Abyss update.