The Idorioka's Future BR1 is a starship in No Man's Sky.

The Idorioka's Future BR1 is a Hauler-type starship in the universe of No Man's Sky.

Notable for it's bright glowing pods and side shields, the bright red matches the color of the star system it is from. This S-Class comes with high Shield and Warp bonus with special tech installed as pictured. 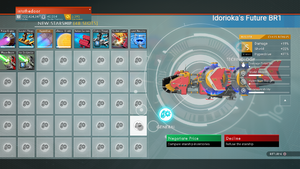 A C Class version of this starship first appeared at the space station, but reliable spawns of A Class and then S Class happened at a Trading Post on the EXTREME planet Denion Major.