From No Man's Sky Wiki
(Redirected from InExCor)
Jump to: navigation, search
The subject of this article is from the Desolation update.
The information from this article is up-to-date as of 22 September, 2020.
This page fills the role of Headquarters for a Company organization. The information found here represents a user-created company that is a creative addition to the game.

InExCor is an Exploration Entity.

InExCor is an Exploration Company in the No Man's Sky universe.

It has headquarters in the Ajna'ibni region of the Eissentam galaxy.

Our mission is to explore all 255 galaxies establishing at least one base in a gateway system of each galaxy to facilitate intergalactic travel and exploration. This mission was achieved on 2020-03-27.

The company first started after the founder completed Artemis Path quest and relocated to Eissentam. Here they reached the galaxy core, amassed maximum amount of

, and established a number of bases, mostly in the area adjacent to the galaxy centre. This company has now become the InExCor Eissentam branch.

All InExCor branches have S-34 Resurgent or Dreadnought-class Freighter as their flagships, 30 S-class Frigates, and a selection of S-class Starships of all types. Using proprietary starship upgrading procedure, InExCor set records for starships range, damage, speed and maneuverability.

Members are free to name planets/moons as they wish.

If you want to join, you should contact the founder.

Exploration of all 255 Galaxies[edit | edit source] 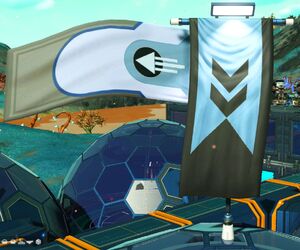 Returning to Euclid from Iousongola

Hunting pirates with a Phase beam