Iovisni-Gam - Astrobase 24-AlienMT station is a star system in No Man's Sky.

Iovisni-Gam - Astrobase 24-AlienMT station is a star system in the No Man's Sky universe.

This system was explored by GenBra Space Corp.

By PS4 explorer Astromons in March 2019. 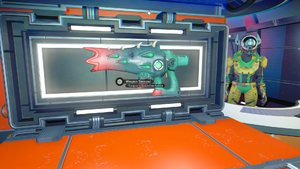 Note: Before I arrived to the system a 24 slot Alien Multi-tool was discovered, however, upon my arrival the only MT I could spawn was the one pictured in a B class. There is a chance that a better MT is within this system but this was the best I could find. NMS is sometimes buggy and this has actually happened a couple times during Astromons and my travels.