Jabberwocky Desolo is a star system in the Vezdarupp Expanse in the Euclid galaxy. The original emeril mining rights were purchased by the Harchon-Utiaoche Mining Corporation and was quite profitable for the Gek company during its heyday. However, mining practices along with a massive solar storm stripped the atmosphere of ozone, leaving it exposed to the intense radiation of the E class sun. As the majority of the easily accessable large Emeril deposits had successfully been mined, a financial decision was made to abandon the system rather than retrofit the buildings and workers with upgraded radiation protection. The majority of the habitable facilities are still operational to the intrepid traveler, but no Gek are stationed on Mylasael any longer, earning the star the moniker "Desolo", which means "forsaken". 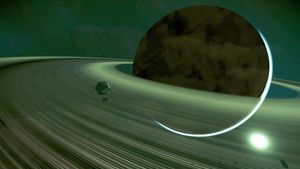 No ships are present in the system since it was abandoned