From No Man's Sky Wiki
Jump to: navigation, search
The subject of this article is from the Beyond update.
The information from this article is up-to-date as of 27 November, 2019.
This article was catalogued by the Galactic Hub. 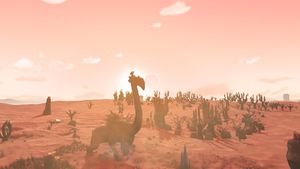 A brave interloper rides atop the native 7-meter diplo species.

Jolivi is a planet in the HUB9-40 Aprely-Matsev II system.

It is most notable for the presence of 7-meter diplos, the P. Marrowyocleus species. This species prefers Enzyme Fluid bait, and can be used as a mount or harvested for Creature Eggs.

The flora of Jolivi are fairly standard for a desert planet. The exception to this is the presence of a variety of underwater flora, which are more rarely present on desert worlds such as this.