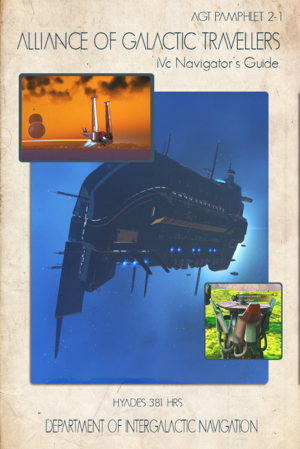 This Navigator's Guide integrates No Man's Sky gameplay with real world aviation and navigational techniques. The guide serves as the foundation for the Alliance of Galactic Travellers

The Alliance of Galactic Travellers or AGT is an on-line, community approach, to playing the single-player NMS game through shared experiences. Our goal is to foster the continued expansion of the community effort and refine techniques that can be utilized by novice and expert players alike.

Knowing where you are is the key to traversing the universe in No Man’s Sky.

NMS intentionally lacks many navigational features that would make travelling the skies easier, favoring a slower, more exploratory approach. This may satisfy the game designers and set of players, but others favor the ability to explore the galaxy from corner to corner like the ships of many science fiction tropes. We favor the latter. Fortunately, there is a community of other players that support the effort. Together, we have assembled tricks and tools to pull together the necessary data for Galactic Coordinates and long range navigation. 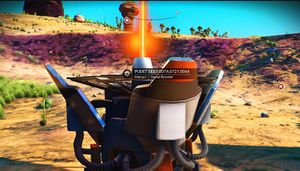 The trick to knowing where you are in the universe involves Signal Boosters, understanding their text output and a little bit of ingenuity.
When approached after placement, every signal booster outputs a data string like the one in the image to the right: PUDET:0EE0:007A:0721:0064

The 3 sections in the middle (0EE0:007A:0721) can be used to retrieve your x/z/y coordinates. You could spend hours reading reddit articles (like we did) to figure out how to use the data or simply enter the code into the Pilgrim Path Star web application. The application can be found at: https://pahefu.github.io/pilgrimstarpath/

Beautiful, isn’t it? Thank you, Pahefu.

Beginning with the Foundation release you can be construct Beacons to serve as personal location markers. A great feature is that they can even be seen from space.

Now that you know where you are it’s time to start thinking about where you are going. There’s a bit of preparation to be done but trust us, you’ll be glad you did it up front.
Let’s start with your Starship. Ideally, you’ve been playing for a while and have an understanding of the ship classification system and have updated to an S-Class Explorer to warp around the galaxy. No? Consider grinding your local systems a while longer until you can make the upgrade.

Classification
Quick overview: S is best, then A is better than B which is better than C. There are plenty of great articles and videos that cover the differences in detail, but as our focus is on navigation just know that the better the class the better the hyperdrive bonus and inventory slot count. This all translates into greater light-year distances that can be covered before refueling and repairing your ship. 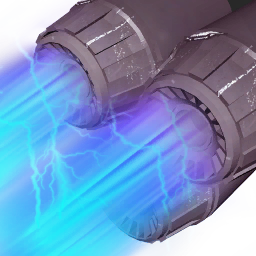 Warp Drive
No matter which class you are about to embark on your journey with, it is imperative to ensure that it is equipped with the best warp drive configuration.

The placement of your Hyperdrive Upgrades has a bonus effect on warp distance. You’ll want to experiment, but linking in a T-Configuration with Theta at the center is usually optimal.

There's a great warp drive and upgrade thread on the Mo Man's Sky Reddit. Check it out here.

You’ve selected a ship and optimized it’s warp drives and you’re looking to the heavens. Before you hit the Launch Thruster there are a few items to consider.

Home Base
Have you already build a killer home base that you plan on returning to during / after your tour of the galaxy?

Are you untethered and plan on moving your base from planet to planet to suit your travels?

Either option is perfectly acceptable, but changing strategies mid travels can be a bit cumbersome. We recommend choosing one method and sticking to it until you find a place in the galaxy where you want to settle down. 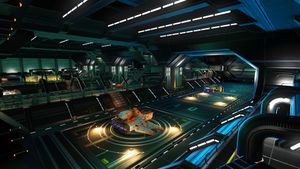 A Freighter isn’t necessary for traveling the galaxy, but it is certainly a luxury worth having. It’s really the best of both options above, as it can be used like a home base and summoned to any planet.

If you’re not itching to begin your travels, take the time obtain your own Freighter. If you can't hold off on the adventure of galactic exploration, save your credits as you travel and purchase one when you can.

Path of the Atlas
We don’t want to spoil the storyline too much, so if you want all the details take the time to complete the Atlas Path before reading any further.

There is a reward for completing the path that is CRITICAL when navigating the stars and we’ll cover it in the tools section a little later on.

That's it for PreFlight >>> You are clear for Liftoff.

Next up >>> iVC GALACTIC NAVIGATION